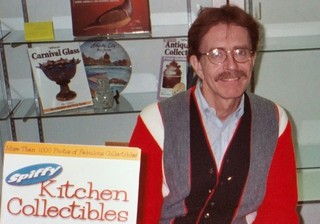 --Craig Wilson in USA Today
You don't have to be quirky to collect kitchen gadgets, but it helps!

Brian S. Alexander grew up in Michigan City, the middle kid in a boisterous family of eight. He is graduate of Purdue University with a BSE degree in general engineering and also a graduate of the Illinois Institute of Technology with a Masters degree in Architecture. He currently resides in Evanston, Il, a short jog from the windy breezes of Lake Michigan.

An avid inventor and musician in college, he was profiled in the school paper with an article about one of his off-beat products - Clothing for Telephones! Unlike Alexander Graham Bell, this breakthrough did not make him rich or famous. He later was awarded three patents, one for a baton twirling doll – which made him no money – and two for very successful products – which also made him no money.

He has been profiled in USA Today, Antique Week, Cooking Light, The Wisconsin State Journal, Eric Zorn's blog and the Tempo section of the Chicago Tribune, Pioneer Press, Atomic Ranch, The Antique Trader, and The Orlando Sentinel. He has also been on National Public Radio, and seen on WTTW’s Chicago Tonight, Chicago WGN-TV’s Early morning news (Twice!), Chicago ABC 7 News at 11:00 AM, Chicago CBS 2 News, and was a runner-up in a barbeque contest on Live with Regis and Kelly. He even appeared on Who Wants to be a Millionaire? - for three seconds!

He has met and had heart-felt twenty second talks with celebrities including: Hillary Clinton, Bob Hope, Jimmy and Rosalyn Carter, Charles Osgood, Dick Clark, Regis Philbin, Martha Stewart, Rachel Ray, and even Don Ameche many years ago! He once worked alongside Tina Fey for about eight months when she was a young wannabe actress trying to break into the Chicago theatre scene. She went on to phenomenal success and good fortune - but he didn’t!

His luck turned around with the publication of his books and subsequent media appearances. Martha Stewart even sent him a thank you letter from prison after receiving copies!

He has completed work on a humorous, off-beat novel with a tenuous toe-hold on reality, Waiting for the Real World to Catch Up! that includes a host of fun things for readers. The book was written, workshopped, revised and edited over a five year period. The eBook version of the work is now available for the Kindle, Nook, iPad, and more, and includes over 150 pictures, 47 song and video clips on YouTube, a complete printable game, three product tie-ins on eBay, and other surprises. Get it while supplies last at only $2.99!